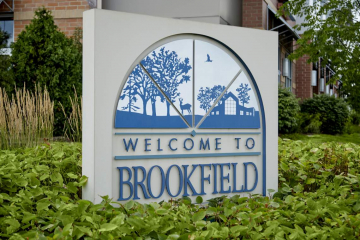 A prosperous municipality west of Milwaukee, Brookfield was originally settled as a farming community with two major railroads running through the center. The old Watertown Plank Road, literally made of mud and wood planks, started here and took travelers all the way out to Watertown and beyond.

Al Capone called Brookfield home back in the heyday of prohibition. His hideout can be found on Capone Court!

Brookfield is perhaps best known for its iconic Bluemound Road, which provides access to innumerable major business, food and retail destinations to the entire community.

Brookfield is bordered by Greenfield Avenue to the south, Lisbon Road/Hampton Avenue to the North, 124th Street to the east and Springdale Road to the West and surrounds Elm Grove on three sides.