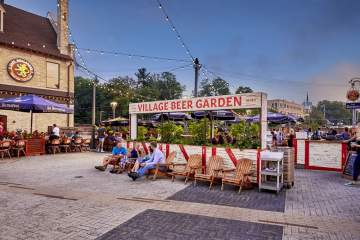 Wauwatosa comes from a Potawatomi Indian word meaning “firefly,” which are known to have inhabited this part of the Menomonee River Valley for centuries. The area’s first settler, Charles Hart, arrived in 1835 and built his home and a saw mill here. Still a part of the township of Milwaukee, it became Wauwatosa in 1842.

Fondly referred to as Tosa amongst locals, Wauwatosa lies at the heart of the metro Milwaukee area, about 14 minutes from Downtown Milwaukee. Not that residents need to leave the neighborhood to find entertainment.

Tosa offers the ideal mix of urban living in a suburban setting. Its charming downtown is quaint and highly sought after, boasting specialty shops and eateries as well as an incredible nightlife. Close proximity to these establishments provides incredible walkability in town. The North Avenue Corridor between 65th and 76th Streets is experiencing a huge resurgence and development with the help of bars and restaurants appealing to a younger crowd, driving up values and appeal to the community.